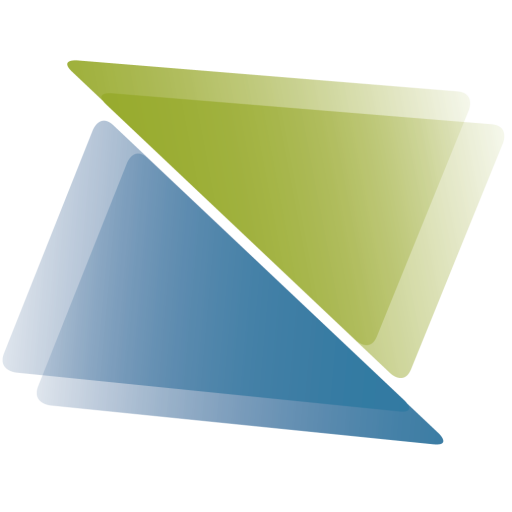 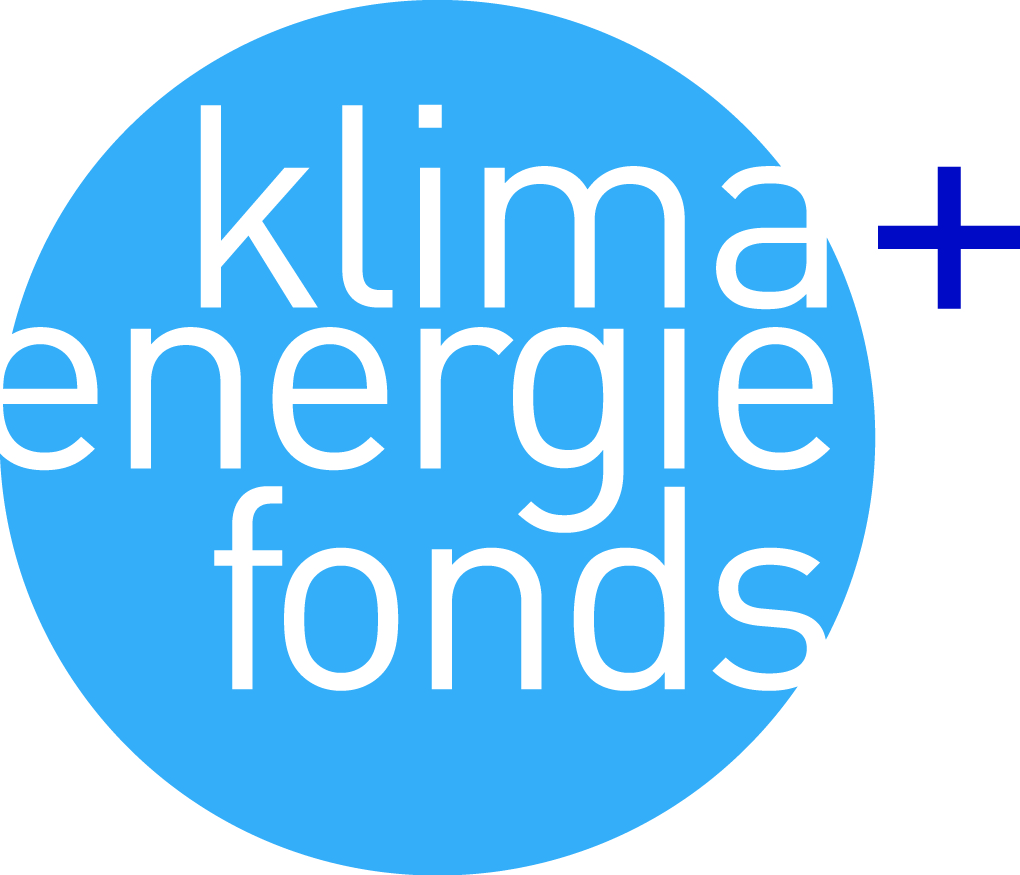 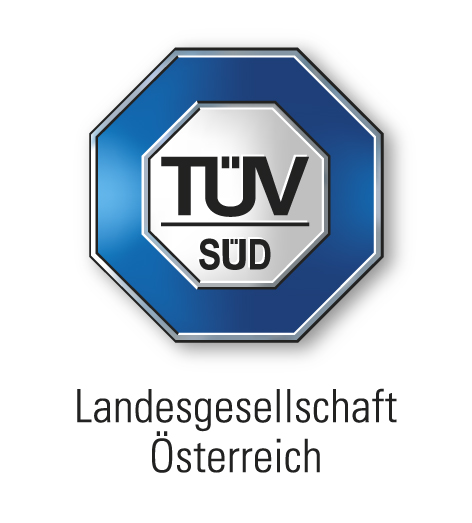 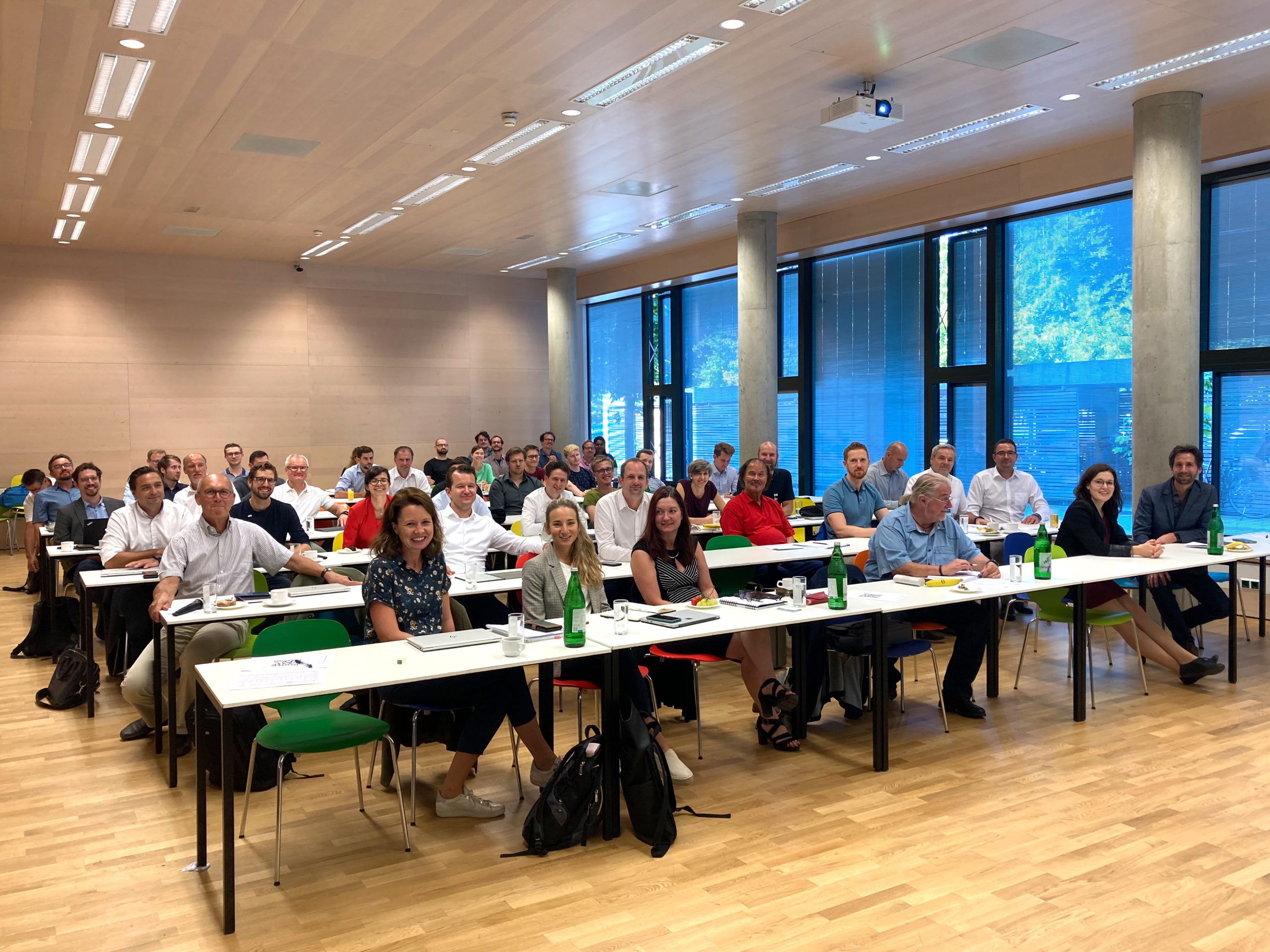 Hydrogen is the simplest atom consisting of one proton and one electron and is the first element in the periodic table. Atomic hydrogen is very reactive and combines with itself to form the molecule H2 and with almost all other elements to form a variety of inorganic or organic compounds (hydrides). Hydrogen is by far the most abundant element in the universe, accounting for over 90% of all atoms. The big bang theory assumes that hydrogen, helium and traces of lithium were formed by fusion about 13.5 billion years ago, which subsequently formed all other atoms. In space, hydrogen occurs in its atomic form due to the low values of temperature and pressure. The interstellar gas consists almost entirely of hydrogen, it is so diluted with about 1 hydrogen atom per cm3 that it is considered a vacuum. Hydrogen is the main component of stars, which derive their energy from the fusion of hydrogen into helium. In the earth’s crust, oceans and atmosphere, the mass fraction is 0.9 %. In this context, the part of the earth accessible to humans’ accounts for less than 1 % of the earth’s mass. The proportion of hydrogen in the Earth’s atmosphere is only 0.5 parts per million (ppm). The largest proportion of terrestrial hydrogen occurs in combination with oxygen, in the form of water or water vapor. In the human body, hydrogen is by far the most abundant element, accounting for over 60 % and about 10 % of the body mass.

2. How important is hydrogen for our clean energy strategy and long-term sustainability goals?

Reducing the greenhouse gas emissions is one of the most important current and future tasks facing humankind, for which there are essentially only a few strategies available: expansion of renewable energies (and energy storage), more efficient energy converters and to reduce consumption of resources at all. The expansion of renewables brings significant challenges with it as renewables are only available for several thousand hours a year, but we need secure year-round energy supply. As a bulk energy carrier, hydrogen can close this spatial and temporal gap, integrating and balancing natural variation in renewable energy supply, as well as storing it seasonally. With hydrogen as an energy carrier, renewable energy is available whenever you need it. Hydrogen technologies also require a relatively low adaption of infrastructure and its application is therefore potentially low cost. Around two thirds of all the primary energy used by Europe comes underground via pipelines. In the future, our energy will very likely still come mainly via pipelines, but it will be mainly green energy in the form of hydrogen. This green energy will then be used in industrial and/or chemical processes or converted into heat and motion or electricity mostly by zero emission technologies like fuel cells. Hydrogen is an essential building block of the green energy transition, since it does not contain any carbon and its conversion or combustion generates only water. Support of a carbon neutral society using hydrogen is continuously increasing by European directives and national policies resulting in expansion of required hydrogen infrastructure.

3. What are the properties of hydrogen?

Hydrogen is a colorless, odorless gas at normal conditions without toxic effects, not hazardous to water, it has the lowest density of all gases, a high diffusion tendency and high thermal conductivity, low melting and boiling temperature, forms ignitable mixtures with air in a wide mixing range with high flame speed and high combustion temperature. The hydrogen molecule contains no carbon and is therefore considered a climate-friendly energy carrier for many processes and energy conversions.

4. How can hydrogen be produced?

Since hydrogen does not occur naturally in its pure form, it must be produced using energy. To this end, various processes are used that use different primary energy sources and hydrogen compounds, whereby the efficiency and emission of carbon dioxide are important assessment criteria. Hydrogen can be produced from numerous energy sources. The most common are:

5. What is the blue, green, brown, pink, turquoise and grey hydrogen?

In the energy industry, colour codes or nicknames are used to distinguish the different methods of producing hydrogen. Green hydrogen, blue hydrogen, brown hydrogen and even yellow hydrogen, turquoise hydrogen and pink hydrogen. Hydrogen is a colourless (invisible) gas under normal ambient conditions. Therefore, somewhat confusingly and despite the colourful names, there is no visible difference between the different types of hydrogen. In order to indicate the production method and the energy, often also the raw material, used to produce it, an assignment of colours has been established. However, there is no universal naming convention and these colour definitions can change over time and even from country to country.

6. How is hydrogen transported?

95 % of produced hydrogen is utilized locally for industrial processes. Only 5 % are transported by various means of technology. The most common way of transporting hydrogen is in gaseous compressed state at 200-500 bar (CGH2) or liquified (LH2). On road a typical 300 bar GH2 trailer can transport around 1 t of hydrogen and a typical LH2 trailer around 3.5 t. For long distances and large quantities, distribution via pipelines is appropriate. For that, existing natural gas pipelines can be easily adapted towards 100 % hydrogen or up to 4 Vol.-% of hydrogen can be mixed into the natural gas grid in Austria without any adaptions. Within the scope of the project EnergyHyWay the transportation of large amounts of hydrogen is investigated. A tool developed by HyCentA enables the calculation of the energy efficiency of various transportation paths. The aim of the exploratory study is an overall assessment of the most promising hydrogen supply paths for mobility. This includes a comparative energy and ecological evaluation – starting with green hydrogen and ending with the final application in mobility. In addition to the direct hydrogen pathway, the evaluation also assesses different hydrogen carrier systems such as liquid organic hydrogen carrier (LOHC) or ammonia (NH3).

7. How is hydrogen stored?

8. How does electrolysis work?

Electrolysis is an electrochemical process, what means that electricity is applied in a so-called electrochemical cell leading to the breakdown of molecules in this cell. An electrochemical cell consists of two electrodes (anode and cathode) separated by an ion-conductive material (electrolyte). In the case of water electrolysis, the application of electricity leads to the splitting of water molecules (H2O – liquid or gaseous) to H2 (gaseous) and O2 (gaseous). The two product gases are leaving the cell and can be used separately. Via electrolysis electrical energy can be converted into chemical energy. 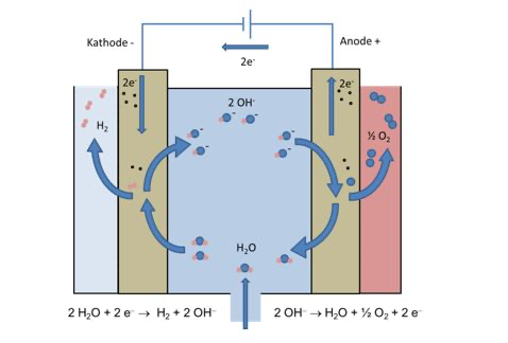 9. What different types of electrolysers exist?

P2G: Renewable electricity (power) is used to create a gaseous fuel. Power-to-Gas (P2G) is the only technology capable of providing storage at terawatt-hour scale. Hydrogen is stored in a storage system like tanks, caverns, or the natural gas grid. Using the natural gas grid would allow for very large amounts of renewable hydrogen to be stored very economically, as very little new infrastructure needs to be built. Power-to-Hydrogen (P2H2) means a technology in which hydrogen is produced via electrolysis process. Hydrogen becomes the carrier of renewable energy when renewable power is used for this process. Power-to-Liquid (P2L) is a process where the products from the P2G process are subsequently converted to liquid fuels, for example by the Fischer-Tropsch process where H2 and CO2 react to for liquid hydrocarbons (petroleum, diesel). Power-to-Heat (P2H) allows the utilization of excess electricity generated by renewable energy sources in the form of heat.
Power-to-X (P2X) is a series of technologies allowing the conversion of electricity into energy carriers, chemicals and heat. A term which regroups different employed techniques in this regard, where X refers to the result of conversion.
Within the scope of Renewable Gasfield a power-to-gas plant is set up in Southern Styria. A PEM-Electrolysis produces green hydrogen from regenerative resources, mainly a 1 .5 MW PV field onsite. H2 is either used for a 350 bar hydrogen filling station or for a methanation process of carbon-rich biogas. In the southern part of Styria (Austria) an existing biogas plant is operating at half capacity. Coupling it with a load-flexible methanation will enable the generation and storage of synthetic natural gas (SNG) in the gas grid.

11. How will hydrogen support challenging sectors for green energy, like chemicals, cement and steel?

Around 2 % of worldwide energy consumption is already hydrogen. It is not a niche, but an established energy carrier, today mostly produced from natural gas. A key task is to transform production of this grey hydrogen to green. But the potential is much, much bigger because we have to decarbonise a lot more processes, for example steel production. For most high-temperature processes like cement or glass, electrification is not an option because you need a gaseous space for the processes itself and sometimes also a chemical reagent, like in iron smelting. Today, these processes run mostly on natural gas and we have to transform them to clean gas – that is hydrogen. There are also completely new sectors emerging in the mobility sector, for example in heavy road traffic and shipping. In the energy sector itself we need to integrate more renewables and the electrolyser, especially power-to-gas systems, are key to this. Hydrogen is key to greening all these high intensity energetic processes.

Hydrogen is safe to be used as an energy career when the national regulatory frameworks are respected. Hydrogen is just as safe as any other transportation fuel (i.e. gasoline, diesel and natural gas). The tanks are put through rigorous testing including crash tests, gunfire and performance requirements. They are also made of high-strength composite materials that are much stronger than steel. For example, testing tanks are subjected to more than twice the maximum pressure they experience under normal service conditions to ensure high-quality performance. In addition, hydrogen fuel stations have redundant protection systems in place, so it’s virtually impossible to over-pressurize a vehicle fuel system. Fuel cell electric vehicles (FCEVs) and the fueling stations to supply the hydrogen are just as safe as conventional systems today. All FCEVs have to meet the same rigorous federal safety standards that apply to all consumer vehicles. Hydrogen has been safely produced and used in industry for more than 50 years. Safe handling practices are essential, as with any other fuel, but hydrogen is non-toxic and does not pose a threat to human or environmental health if released.

13. As energy carriers, what is the difference between electricity and hydrogen?

Hydrogen is a gas (at standard conditions) with a high reaction enthalpy, meaning huge chemical energy is bound. Once produced, hydrogen stores a lot of energy, which can be stored in a wide variety of technologies and converted back into electricity and heat as needed. Electrical energy (“electricity”) is sometimes lumped together under energy carriers, although it is more appropriate to call it a form of energy, since electricity must be consumed at the same time as it is generated. To store electrical energy, it needs its own storage technologies such as pumped storage or accumulators.

We support research and development

Our industry and research members rely on longstanding eperience in the fields of hydrogen and green energy.